Food and eating is a huge part of everyone’s identity. Favorite dish, meal, drink, vegetarian, pescatarian, vegan; choosing not to eat something contributes to someone’s self food picture just as much if not more than what they do choose to eat.

I feel that food became a large part of my identity early on. My brother was a very picky eater, while I was the complete opposite. For identical twins subjected to a constant stream of comparisons, well intentioned as most of it was, you tend to latch onto anything that sets you apart. I may be blowing this out of proportion but this one difference could have been the first branch in the tree of our development, the first fork in the path, small as it may have been, setting us down our own roads to who we would become.

While the two of us were very different in eating preferences we were both very polite, or at the very least conscious of the need to be polite, fail as we might at actually succeeding. This paired with my father being the pastor of a church meant a LARGE number of dinners with strange families. I’m pretty sure it was not premeditated, and it was not paired with any verbal dialogue whatsoever; but for as long as I could tell we had a little routine. Whenever something was served that I knew my brother wouldn’t eat, I would finish my portion very quickly, then, as discretely as possible, we would switch our plates or bowls. Depending on what it was, sometimes a furtive slide onto my plate with a spoon was sufficient. I would then go on to finish his portion as well, nobody the wiser.

This dynamic was probably the first situation where we had clearly defined and static roles. Everything else that we did together the roles and positions would be entirely dependent on constantly changing arbitrary factors. We were very comfortable trading leader follower, pusher puller, front back, scout guard. However, this never changed; there was never a single time in the million meals we have eaten together where HE ate something for ME. Consequently, food became the first distinguishing factor in my identification as an individual as opposed to the shared identity I had with my brother.

I could speculate about how this played out over the years and the impact it had on our young impressionable minds, but that’s going down a rabbit hole with no end. As we grew older my brother became less picky, and our preferences grew increasingly identical. But there was always one thing he couldn’t eat, tears would come down his face if he tried choking it down… idiot was in his twenties and still couldn’t finish a bowl. 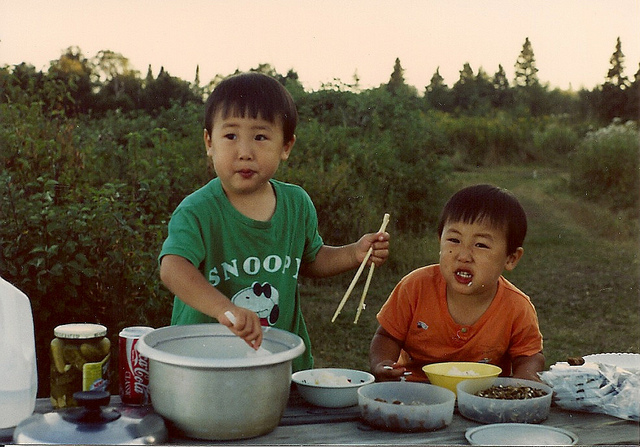